I hadn’t been a professional news reporter for even six months when I walked into the office to be greeted by the editor and publisher. “Get in your car and head to Hiawatha,” the publisher told me. “Something is on fire down there – sounds like a structure.” Hiawatha is a small community, originally a mining town, that lies about 15 miles away from the closest city. A group of polygamists bought the town several years earlier. This was the only time I was allowed to set foot inside the gated compound. 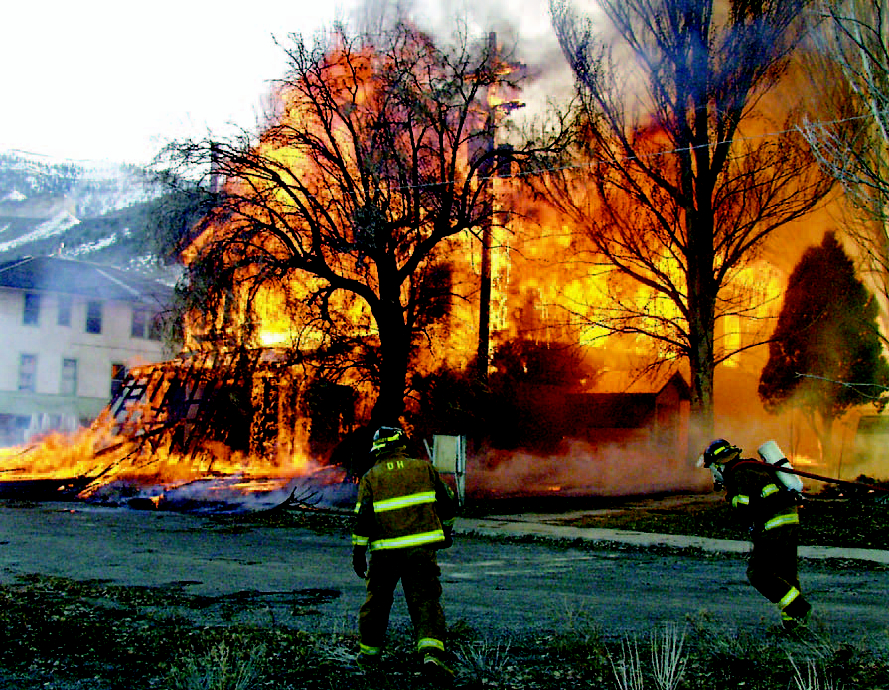 Firefighters from Price, Helper, Wellington and Huntington responded to a fire at the old cultural hall in Hiawatha last Thursday evening. Two fire trucks from each municipality, three ambulances and two water trucks from the county responded to the call.

Chief Kent Boyack of the Price City fire department said the fire started when a chimney from a furnace overheated. The surrounding insulation ignited and the blaze spread from there.

With no working fire hydrants in the community, the only water available was in the fire trucks. Firefighters refilled some of the trucks by pumping water from a shallow creek east of town. When tanker trucks from the county arrived, responders refilled the trucks. But with the building already engulfed in flames, attention turned to two neighboring buildings, the old post office and the old United States Fuel Company administration offices. The post office was reported to be vacant, but there were people living in the office building.

Boyack said that four minors allegedly were in the cultural hall. The parents had reportedly left for Florida that morning and left a 16-year-old in charge of three younger children. Carbon County Sheriff Lt. Roy Robinson said the Division of Child and Family Services was called to handle the case.

One firefighter suffered from smoke inhalation, but there were no other injuries or fatalities reported.

Boyack said that the actual cost of damages is unknown because the department has been unable to contact the occupants to determine what was in the building. He estimated damages to be around $100,000.

Portfolio and resume of a professional journalist